Forestry: The Future of Logging in the NYC Watershed

You are here: Home / News / Forestry: The Future of Logging in the NYC Watershed

Every year the WAC Forestry Program uses technical assistance and cost-sharing to help Watershed loggers install water quality protection measures called Best Management Practices (BMPs) on timber harvests in the Watershed. Until recently, however, we had no way to gauge our impact with loggers. Unlike farms that generally don’t change location, loggers move vastly throughout the landscape. And unlike some other states, New York has no system of timber harvest notification that requires landowners or loggers to alert the state before they log.  Lacking such a system, we had no way of knowing how much logging was happening in the New York City Watershed, the extent of its threat to water quality, or how effective our programs were at reducing water pollution from logging.

That changed in 2017, when we learned about a computer program called Feature Analyst that can use aerial photographs to find the small gaps in the forest canopy created by logging. We set out to use Feature Analyst to get an idea of how much logging occurred in the Watershed over the previous years.

This project revealed, for the first time ever, the scope of logging in the New York City Watershed. We learned that the Watershed has 183 timber harvests on private lands annually, covering an area of 7,092 acres. This area represents 1.25% of the Watershed’s private forest cover, a level of harvesting that should allow for a sustained yield of timber over time. Our logging BMP cost-share program works on 45 of these harvests annually, or 25%. However, the program works primarily on larger harvests, so 40% of the harvested acres occurred on logging jobs where we funded BMPs.

We also learned that the cutting of trees specifically is not a water quality threat to New York’s water supply. Nearly all acres logged were light harvests (93%), meaning loggers removed less than 50% of the canopy. Almost no logging (5% of harvested acres) occurred within 100 feet of a stream, and 96% of that logging was light. This is good news for water quality, because previous research in the Watershed has found that when canopy removal is less than 50%, increases in common water pollutants like nitrates are minimal and short term. Only when intensity increases beyond 50% do those increases become significant and long lasting. That said, the systems of roads and trails loggers use to remove timber from the woods can still cause water quality problems even on light harvests, so we plan to expand our efforts to help loggers install more BMPs on those trails in the future. 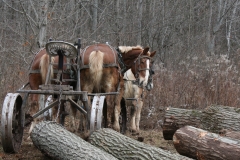 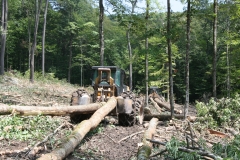 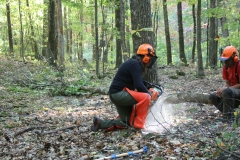 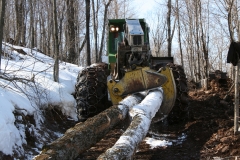