You are here: Home / National Academy of Science

More than nine million people rely on the outstanding quality of New York City’s unfiltered water supply. Ninety percent of this water comes from the Catskill/Delaware Watersheds located 125 miles from New York City, in rural upstate New York. Ten percent is provided by the suburban Croton Watershed located east of the Hudson River. The water provided by this system is a vital economic asset to residents in the City.

To residents in the Watershed, on the other hand, farming is equally vital to their economy. Nearly 500 dairy and livestock farms are situated throughout these water supply watersheds, in addition to approximately ninety other agricultural enterprises.

A collision seems inevitable, therefore, when in September 1990 New York City issued a discussion draft of proposed regulations as part of a comprehensive watershed protection plan, dairy and livestock farmers immediately expressed concern that watershed regulations would force the farming industry out of business. They solicited assistance from the Farm Bureau, NYS Department of Agriculture and Markets, NYS Water Resources Institute, and other local state, and federal agencies.

After 25 years, the Watershed Agricultural Council has made a significant impact on the region’s farm and forest economy, as shown in this 2017 report done for Delaware County. In addition to our Agricultural Program, Forestry Program and Conservation Easement Program, the Economic Viability Program has successfully marketed products across the state through their Pure Catskills branding campaign, showcasing the farm and forest producers in the region.

Outstanding water quality links farmers in the foothills of the Catskill Mountains to more than nine million consumers of New York City’s water supply. This link is manifested in the Watershed Agricultural Program, managed locally by watershed farmers with assistance from New York City. The Program promotes Whole Farm Planning. This holistic process balancing water quality protection and economic viability for framing is a reliable and cost-effective partnership for water quality protection.

This partnership enables farmers to control their own destiny while enhancing the protection of the quality of the New York City water supply.

The Watershed Agricultural Program reconciles environmental, economic, and public health concerns based on scientific research and local leadership. It is endorsed by New York State, New York City, the US Environmental Protection Agency, the scientific and environmental community, and most importantly, watershed farmers and local governments. 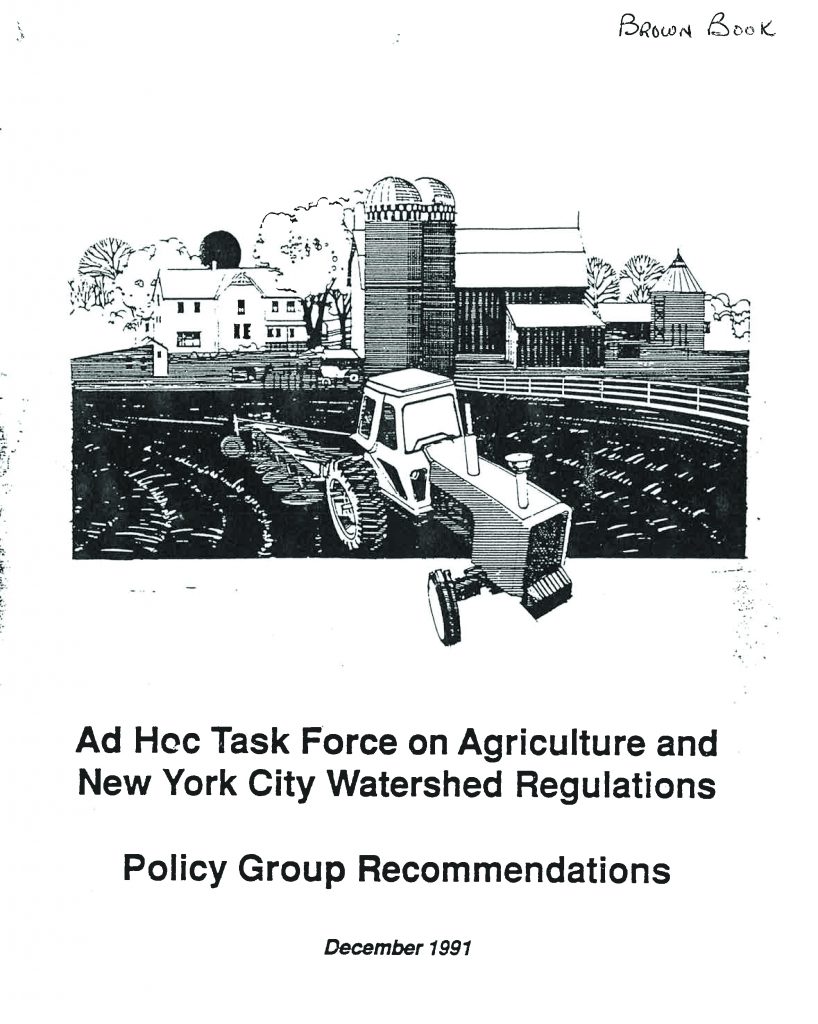 Ad Hoc Task Force on Agriculture and New York City Watershed Regulations was convened in 1990. The Task Force explored non-regulatory alternatives for protecting and maintaining the quality of New York City’s water supply while helping to sustain the economic viability of farming as a preferred land use in the watershed. Year-long intensive discussions and negotiations resulted in recommendations to be used for a foundation for the Program. Watershed farmers and New York City agreed to develop a Program using the recommendations from the Task Force report known as the Brown Book. They include financial support, voluntary participation, local leadership, and best scientific understanding of pollution prevention.

A Watershed Agricultural Council (WAC), comprised predominately of farmers, was established to advise and eventually administer the program.

The program was set up in two phases. Phase I tested and demonstrated Whole Farm Planning on ten pilot farms, requiring supporting research. New York City provided $4.0 million through its Department of Environmental Protection (NYC DEP) for Phase I.

At the end of Phase I, Watershed Planning Teams, with the help of the Cornell Scientific Support Group and the USDA Natural Resources Conservation Service, developed a Planning and Implementation Guide Watershed Decision Support for implementation of water quality barriers on the pilot farms. 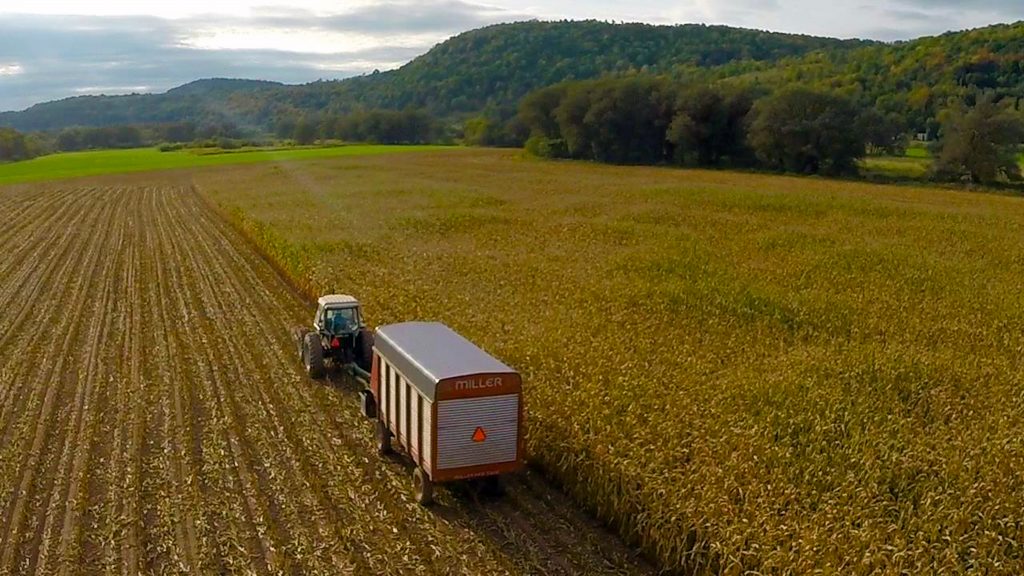 NRCS Agricultural Conservation Easement Program
Over the past 25 year, NRCS has worked with landowners to protect more than 4.4 million acres of wetlands and agricultural lands, a value of over a billion dollars in a diversified real estate portfolio that has resulted in improved soil health, water and air quality and wildlife habitat.  Read more about the easement successes around the nation.

TNC: Conservation Easement – Conserving Land Water and a Way of Life
Conservation Easements are one of the most powerful, effective tools available for the conservation of private lands. Their use has successfully protected millions of acres of wildlife habitat and open space in the United States and in many countries.

AFT: Cost of Community Services
Cost of Community Services (COCS) studies are a case study approach used to determine the fiscal contribution of existing local land uses. A subset of the much larger field of fiscal analysis, COCS studies have emerged as an inexpensive and reliable tool to measure direct fiscal relationships. Their particular niche is to evaluate working and open lands on equal ground with residential, commercial and industrial land uses.

EPA: The Economic Benefits of Protecting Healthy Watersheds
Healthy intact watersheds provide many ecosystem services that are necessary for our social and economic well-being. These services include water filtration and storage, air filtration, carbon storage, nutrient cycling, soil formation, recreation, food and timber. Many of these services have not been monetized and therefore the economic contributions of healthy intact ecosystems are often under-valued when making land use decisions. Ecosystem services provided by healthy watersheds are difficult to replace and most often very expensive to engineer (see chart). An engineered ecosystem service replacement may only provide a fraction of the services provided by highly functioning natural systems. 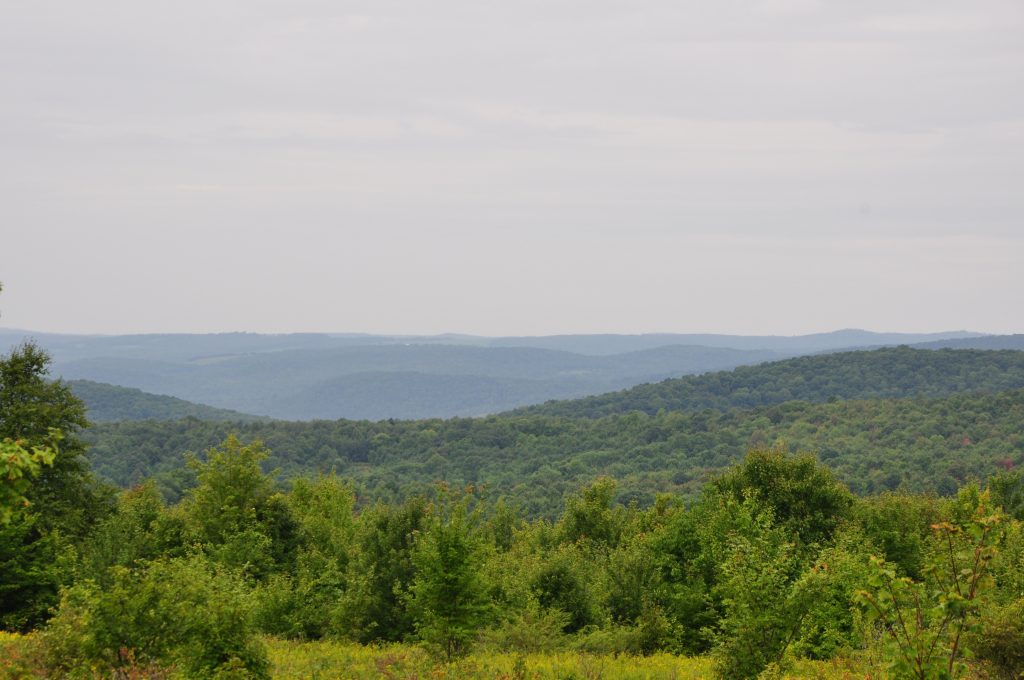 Between 1984 and 2000, the parcelization of family forests in the New York City Watershed caused a decline in average parcel size from 19 to 16 ac. However, little is known about the timing and intensity of development on subdivided parcels, which has the potential to negatively affect water quality by increasing nonpoint source pollution associated with nutrient runoff and erosion intensified by increased impervious surface area. Using a combination of field measurements and analysis of digital orthoimagery, this study quantified forest cover and impervious surface area on new parcels resulting from subdivision and compared subdivided parcels to intact parcels. Measurements of buildings, driveways, and other features show that by 2005, parcels subdivided between 1984 and 2000 were developed to nearly the same intensity as intact parcels, with 68% of parcels classified as developed. Results indicate that residential development on subdivided parcels has added more than 640 ac of impervious surfaces on family forest since 1984, apparently without being accompanied by observable net reductions in forest cover at the landscape level. These trends have important implications for public policy intended to maintain a forested watershed and prevent the degradation of drinking water quality from non-point source pollution associated with development.

Wildlands and Woodlands Farmlands and Communities
The Wildlands and Woodlands (W&W) vision, described in two Harvard Forest publications,1, 2 calls for collaboration among conservationists and willing landowners to permanently protect by 2060 at least 70 percent of the New England landscape as forests, along with another 7 percent that is currently in agriculture—intact and in use for both nature and people. It envisions a balanced approach to conservation and preservation: most land would be actively and sustainably managed for wood, food, and other values while continuing to deliver clean water and air, wildlife habitat, recreation, and support for human lives in a changing environment. About a tenth of the forest (7 percent of New England), along with associated wetlands, streams, ponds, and other habitats, would comprise large wildland reserves shaped by natural processes.